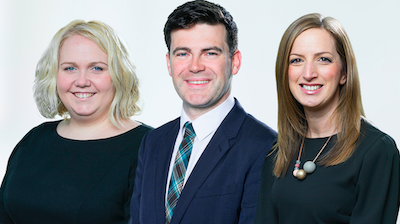 Planning and development consultancy Lichfields has announced 16 promotions across the business including three new planning directors.

The new directors are Helen Ashby-Ridgway in the Cardiff office, Gordon Thomson in the Edinburgh office, and Anna Turton in the Leeds office.

Ashby-Ridgway joined Lichfields as a planner in 2007 and the majority of her project work is in the tourism and leisure sector.

Previously, she was mapping and charting officer at the UK Hydrographic Office, and before that a planning technician at Stockport Metropolitan Borough Council.

Thomson has been with Lichfields for five years, joining after more than ten years at planning consultancy Barton Willmore, and before that, at South Lanarkshire Council. He works across residential, mixed-use regeneration, retail, tourism and leisure, business, industry and major infrastructure.

Turton has extensive specialises in the preparation and co-ordination of major planning applications. Before joining Lichfields in 2017, she was an associate at consultancy Spawforths, and before that, principal planner at consultancy DPP.

Lichfields has made a further 13 promotions across the UK.

James Harris and Sophie Jefferson in London, Chris Smith in Newcastle, Jade Scott-Meikle in Edinburgh and Melissa Wilson in Manchester have all been promoted to associate director.

Meanwhile, Will Christiansen and Katherine Simpson in Newcastle, and Nancy Stuart, Tom Davies, Maddie Lane and Nuala Wheatley in London have all become senior planners.