Outside interests: Playing in a brass band 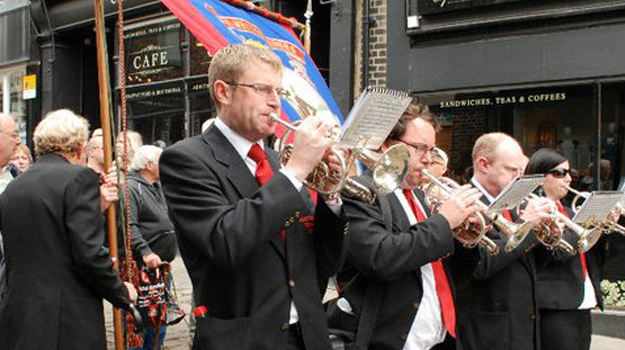 A senior planner in Nathaniel Lichfield & Partners by day, brass band enthusiast by night: Dan Gregg (above left) talks about a personal passion that takes him back to his childhood days in York.

How did you get into playing in brass bands?

I’ve been doing it since I was a kid. I started playing musical instruments quite young. I played the piano at first, from when I was about six or seven, and then started playing the trumpet and the cornet when I was eight or nine. I started in a brass band when I was 12 and before that I played in my school wind band and orchestra. I had a change of brass teacher when I was 13 and he was involved in the local brass band in York. It was the Rowntree’s Band, so it was attached to the Rowntree’s company and we used to rehearse in a little room attached to the factory.

Is it something that you’ve done throughout your life?

It’s been fairly continuous. I went to Newcastle for university and that’s where I live and work now. I’ve played with two bands since I’ve been in the North East. First was the Greggs Bakery Band, which has since ceased to exist, and now I play with the Westoe Brass Band, which used to be associated with the colliery near where I live before it closed. I haven’t played as much as I would like recently because I’ve got a young son, but it’s something that I envisage being able to do more of as he gets older. Hopefully he might take up a brass instrument too.

Is it a big time commitment?

My band rehearses on Tuesdays and Sundays. My partner plays in the same band as well – we actually met through the band – which is great, but obviously with two of us playing it makes it all the more difficult with childcare.

Do your colleagues at NLP take an interest in your hobby?

Some people do, yes. Not everybody knows, but the people I work with the most are aware of it. My director actually plays in a brass band as well, although not the same one.

What sort of music do you play?

The full range. We do the more traditional stuff that you would expect from a brass band – the marches and hymns – but the conductor that we have is keen to do other things as well. So we do arrangements of classical music or more contemporary things like film tunes. We’re lucky in that we’ve got people in the band who can arrange music for us so if there are modern pieces that we want to play they can arrange them for a brass band for us.

What is it about playing in the band that appeals to you?

It’s about relaxation. When you go to rehearsal in an evening it’s kind of an antidote to a busy day working at a planning consultancy. Then there’s the social side. Most of the people in the band I play in are around my age – the age profile is relatively low for a brass band. You also get a sense of achievement out of it as well. We do competitions as well as concerts, which is a lot of hard work but it keeps the standard of the band quite high.

Would you say that a planning professional is a typical brass band member?

Going back over time it was a working class pursuit, but these days people come from all walks of life. They’re still rooted in working class communities, but I think that in term of the membership you get a wide range. Randomly, at one stage there were three town planners in the band I play in. I think that’s the exception rather than the rule!

Do you or a colleague have an interest outside work that you'd be happy to share with your fellow planners? If so, please email richard.garlick@haymarket.com