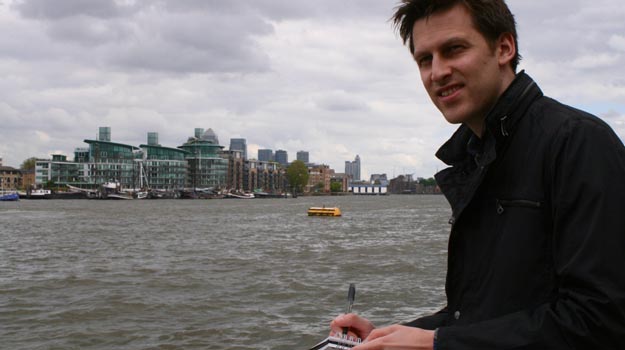 So I hear you’re a keen artist?

It started when I was a kid and it’s been something that I’ve had a passion for throughout my life. I always try to find time for art – finding the time is the main challenge. But it is something that I make time for.

What sort of work do you do?

It’s a mixture. I suppose that I enjoy painting the most because it’s so expressive. Other than that it’s little illustrations, almost like the sort of stuff that I used to do at school. I’ve submitted work to the Royal Academy three times, although I’ve been unsuccessful so far. It’s almost like a one in a million chance, but you’ve got to be in it to win it.

What have you been working on recently?

The latest thing to capture my imagination is the iPad using the Brushes, which is the application David Hockney uses. He put together a huge exhibition of his iPad work recently. So I’m toying around with that at the moment. It’s incredible what you can do with it. We were on holiday recently in Romania and I was messing around with it there doing Hockney-inspired pictures of the forests.

Is that typical subject matter for you? Would you see yourself as a landscape painter?

Not necessarily. I’ve always enjoyed painting things that I can see in front of me, whether that’s a landscape or a building. But then again I’ve always been into surrealism – Dali and Bacon, all that type of stuff – so the more twisted reality type of thing. I switch between the two. It just depends what sort of mood I’m in.

What is it about painting that attracts you?

It’s the escapism more than anything. You just get into your own world and lose track of everything else. It happened a couple of times on holiday. I just sat on the balcony with the iPad and then two hours had gone by and I was told we had to go for dinner. I put my headphones on and just lose myself. It’s also nice to have something to show for your efforts at the end of the process.