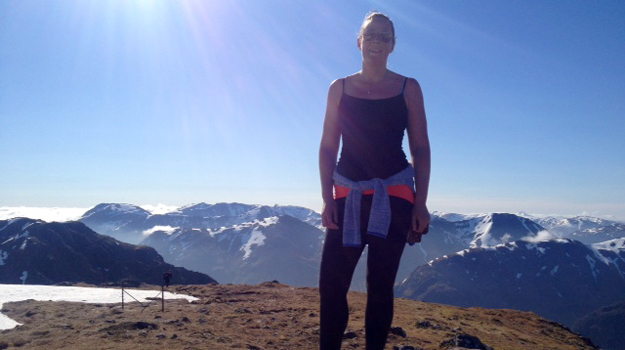 What exactly is mountain scrambling?

Mountain scrambling is as close as you can get to rock climbing without using ropes. So, it’s using your hands and feet to get up pieces of exposed rock.

How did you get into it?

My family has always been into it. So from a very early age my dad used to take us out on mountain walks. I developed a head for heights as a consequence. My husband and I have taken it up and kept going with it, pushing the limit a little bit. We used to just go to the Lake District, but recently we went on a holiday to the Dolomites, where we really went for it. Over there they have systems in place that keep you a bit safer so you can practice scrambling while being attached to the rock face by a harness and a lanyard that you attach to a wire. You can climb thousands of metres up while still being quite safe.

What’s the most exciting climb that you’ve tackled?

My brother and I did a climb last Sunday that is probably one of the most exciting that I’ve done. It’s near Glen Coe in Scotland and it’s a ridge walk between two Munros. There are exposed drops on either side, so the fear of dying is quite extreme and you’ve got to hold your nerve. There’s a two-mile stretch with really quite scary drops. But the weather was perfect and we were up on top by about nine in the morning. It was a clear day but the clouds had settled in the glens below us – it’s what’s called a cloud inversion.

Doesn’t the danger worry you?

It does, yes. My brother doesn’t have any fear at all but I do. It’s a mental challenge to battle it. It isn’t a rational fear because you’re going to make damn sure you don’t slip, but at the same time there is a chance that you could slip and hurt yourself. Those thoughts do run through your head but you’ve just got to focus. If you freeze it’s not exactly going to help.

What is it about mountain scrambling that appeals to you?

It’s the adrenalin, the extremeness and doing something different. The feeling afterwards makes it all worthwhile.

Without wishing to sound like a killjoy, what does your mum make of it?

We rang my mum last weekend and told her what we were doing. She used to do mountaineering when she was younger, so she knows what she’s talking about. She read up on the route and asked if there was going to be snow up top and whether we had a rope. I told there was a bit of snow and that we didn’t have a rope. She said: ‘Catherine don’t do it!’ We just ignored her in the end, but I did call her as soon as we were off the mountain. I think she was quite relieved to hear that we were safe.