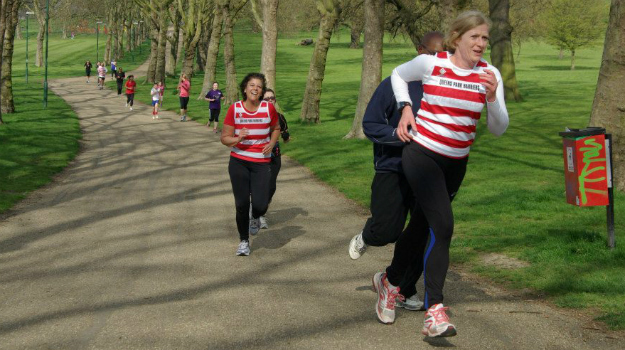 Alice Lester (above right) is one of two programme managers based in central London at the Planning Advisory Service. In addition to being jointly responsible for delivering the service’s overall offer, she also works on plan-making and councillor-briefing and training. Later this month she will run the London Marathon.

Q: How long have you been into running?

I’ve been running for about seven or eight years now. About three years ago I joined my local club – Queen's Park Harriers, since then my running has certainly improved and I’ve become more ambitious. I’ve got a running-club place for the London Marathon.

Q: Have you run the London Marathon before?

This is my first time to run the London Marathon, but I ran a marathon from Nice to Cannes, in France, a couple of years ago.

Q: Is running something you actually enjoy?

Yes – I run with friends, so it’s a social thing as well as a fitness thing.

Q: Do you have a target time for this year’s marathon?

My target time is 4:45, which I’m pretty confident is realistic. I ran the French marathon in 4:55, so its only trimming 10 minutes off.

Q: How is your preparation for the marathon going?

I train with the running club once a week and we’ve just been building up the miles since December. Added to that, I run to work once a week, and I’ve also been building up the miles at the weekend, culminating in a 20-mile run about three weeks ago. Basically, I’m doing some form of training four or five days a week, and I’ve been aiming to do about 30 miles a week since Christmas. Rest days are important too, though.

A: Is there much of a running culture at the Planning Advisory Service?

Not so much, but there is a cycling culture!

Q: Does running help you with your work in any way?

I think that running gives you good head space. Whatever it is that you need to think about, it certainly gives you an opportunity for some clear thinking.

Q: You’re running the marathon in aid of the British Heart Foundation. Can you tell us about your choice of charity?

Although I got a running-club place – not a charity runner one – I started to think that it was a wasted opportunity not to raise some money for charity. In February, a friend - Sav Michaelides – collapsed and died of a heart attack while he was playing football. He was only 60. It made the British Heart Foundation an obvious choice.

Alice can be sponsored for the marathon at her Virgin Money Giving page here.

We'd love to hear about the activities to which you devote your time outside working hours. Please email us at richard.garlick@haymarket.com