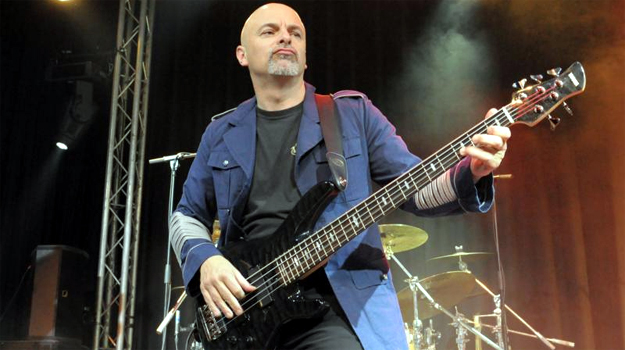 Planning consultant John Jowitt tells us about his other job – as a semi-professional bass player.

Q. How did you get into playing bass?

A. I didn’t get into it until relatively late – about the age of 17. I guess it was the usual route in – there were too many strings on a guitar for me so I picked up a bass instead, which seemed less complicated.

Q. How did you start getting paid for playing the bass?

A. I began in a local band before getting a lucky break through a friend of a friend and joined the Cuddly Toys – the backing band for Angie Bowie.

Q. Who else have you played with?

A. I joined a band in 1986 called Ark which was well known in the Black Country. We won a local band competition. Three years later we went on tour with a band called IQ, who were signed to Polydor and had the same management as Metallica. When their bassist left I got the call and joined them and recorded a series of albums. I have also played with Jadis, Arena,Frost, Dirtbox, and The John Wetton Band. I won the British Classic Rock Society's award for best bass player seventeen times, each year between 1993 and 1998 and again between 2002 and 2011. Last year I stepped in for the bassist of Uriah Heep when he got ill.

Q. Has it been difficult combining your musical career with your planning career?

A. At the beginning I worked in local government. The way it has generally worked is that the tours have been quite short – just a couple of weeks, so I could take time off to do them. I was working for a housebuilder for a while and got an offer to do a six week tour. I told the boss I was going to have to resign because I couldn’t turn it down. He was very good and said he would give me the time off. One time I came back from performing in Philadelphia, got off the plane and went straight into a planning meeting. I had to remind myself that I was lucky to be able to combine two jobs.

Q. What level of performing and recording are you doing now?

A. It comes in fits and starts. I now do more session work, although I play with a covers band in the area. If a recording session comes along then that can be a weekend or just a couple of days. My planning work tends to come first these days.

Q. What is the biggest crowd you have played in front of?

A. I played at a massive free festival at the Hague in Holland with John Wetton, who used to be in Asia and King Crimson. There were about a million people there.

Q. Are there any similarities between your bass playing job and planning job?

Q. The one thing is that sometimes doing a presentation or appearing at a public inquiry feels a bit like a performance. You have to keep going with a smile even if things aren’t going quite to plan.