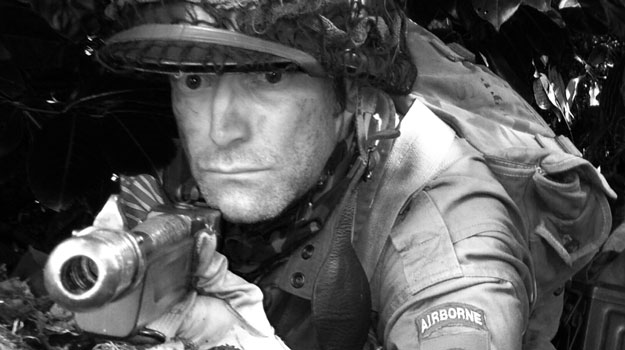 How did you get into wartime military re-enactment?

I am a member of the WW II re-enactment group Liberation ’44, which is based at Horham, Suffolk with the 95th Bomb Group Heritage Association. I did a degree in American history, but had not appreciated the strong affinity between the US Airforce and Suffolk until I moved to East Anglia from London. I stumbled across the group in conversation with our local builder and was easily convinced to sign-up. We mainly portray the 82nd Airborne Division or Military Police scenarios at events based predominantly around East Anglia.

Throughout the year we attend various open days or specific 1940’s events where we don World War II US military garb, take up arms and jump into jeeps and trucks of that era. We re-enact various scenarios: one day we will be in our 'snowdrop' whites of the military police guarding an aircraft hangar or keeping the peace at a '40s dance; another day we will be in full fighting mode for an imaginary war scene, dressed as paratroopers and dropped behind enemy lines to secure a vital stronghold, machine guns at the ready. We have also been asked to do music videos or take part in short films.

I love history and this is such as enjoyable way of getting that enthusiasm across to people. It is all about the ‘living history’ experience, which everyone seems to get something out of, especially children. There is also the camaraderie from the group. Highlights include our annual visit to a 1940s event at Sherringham village, which centres on the stream train, original vehicle convoys and the annual visit of the WWII veterans themselves.

Many of the events involve sleeping outdoors: going back in time is one thing, but living as troops lived brings home some of that hardship in the form of aching bones and lack of sleep. Carrying munitions, food and equipment is great fun, but very tiring as the kit is very heavy.

There are two rewarding elements for me. First is the excitement and pleasure this gives, especially to young people, scrabbling over the vehicles and trying on the headgear – we also give demonstrations in schools, which always goes down a storm. The other rewarding aspect is the response from the veterans who lived all this for real, and all of whom seem to really appreciate that history is being kept alive.

Are there any similarities between your day job and wartime military re-enactment?

My outside interest is all about careful planning and organisation and that's equally true as a professional planner. Detail is key: in the field everyone is responsible for bringing appropriate kit - otherwise you go hungry and cold.