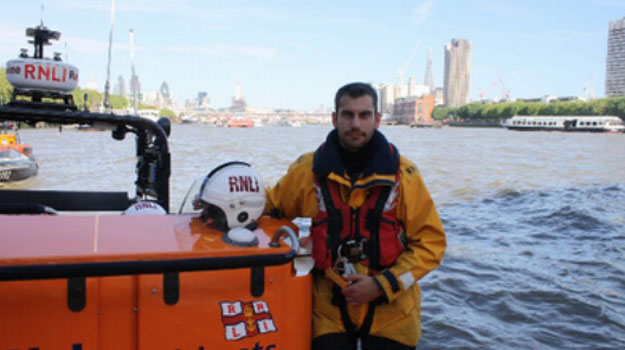 CBRE senior planner Mark Novelle talks about his passion for volunteering as a crew member for Tower Lifeboat on the River Thames in London.

How did you get into being lifeboat crew member?

I've been a crew member for the Royal National Lifeboat Institution charity for about two and a half years and was on the waiting list to join for two years before that. I used to be with the Royal Navy Reserves and the Maritime Volunteer Service and it was while I was with the latter on a job at Gravesend Lifeboat Station in 2011 that a crew member suggested I apply to join Tower Lifeboat. Our crew covers a strip of the Thames roughly between Wandsworth Bridge and the Thames Barrier in a 6m-long lifeboat, the fastest in the RNLI fleet. That boat is powered by 900hp water jets. The crew is powered by physical fitness and adrenalin.

I do a minimum of two 12-hour shifts a month – night or day - and this is the busiest station in the country, receiving an average of 500 call-outs a year. You don't need maritime experience to join the charity, the RNLI provides crew training at its college in Poole and casualty care training at the stations. Call-outs can be for anything – on a Friday or Saturday night jobs often involve revellers on party boats or spilling out from bars and clubs. Some calls are to help crews of boats that have broken down but sadly many are to help people who deliberately put themselves in harm’s way for whatever reason. Most recently I had to pluck a man from the water who had fallen asleep on part of the river wall after a night out, rolled off and dropped 15ft into the Thames.

I love it. I enjoy the camaraderie among the crew, who range from binmen to barristers, and the rush of adrenalin when the bell goes and you're bombing down the Thames at 50 miles per hour, not necessarily knowing exactly what awaits you.

Occasionally you see things you'd prefer not to see but there's lots of support from the crew and the RNLI. One minute you're relaxing, enjoying a cup of tea and the next you could be dealing with a serious injury or even fatality. We have to be on the water within 90 seconds of the bell going. The contrast is challenging.

Knowing you have played your part and done something to help people. A fellow crewman eloquently summed it up that the second greatest achievement in life next to giving life, is saving life.

Are there any similarities between your day job as a planner and lifeboat volunteer?

In planning you deal with the public through consultation and on the lifeboat you deal with them in other ways, but public interaction is a huge part of both jobs. And with both jobs you have to assess lots of different information and come to the best solution, albeit in very different contexts.