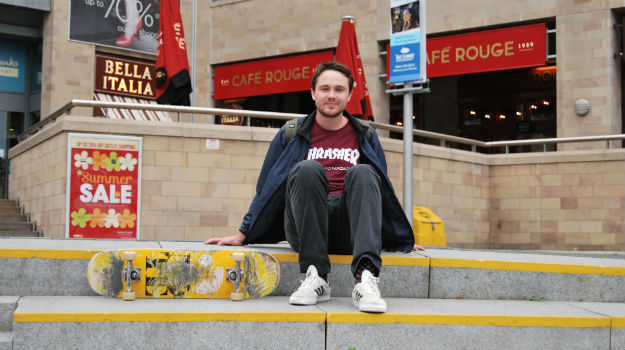 When graduate planner Matthew Grant is not in the office of multidisciplinary practice WYG he is a skateboarder.

How did you get into skateboarding?

I remember seeing skateboarding on the Extreme Sports Channel and thinking how much I would like to try it. Eventually I got a skateboard for my birthday about 15 years ago and I haven’t looked back. Once you start learning, you realise it’s not as easy as the guys make it look on television.

Skateboarding is really sociable and generally involves hanging out with friends and pushing each other to learn new tricks. It also involves a lot of travelling: in the last two years I have been to Barcelona, Copenhagen, Budapest and Berlin for skateboarding. When I was at university, I went to Australia for five weeks to skate. There are different types of skateboarding – street skating, skatepark, bowl and vert - skating up a ramp or other incline. I like to dabble in it all.

It’s all about having fun and doing what you want, unlike regulated sports, and it’s not a competition. There are no rules and you can be as creative as you like. That said, skateboarding has just been announced as a new sport for the 2020 Olympics in Tokyo.

It can be really frustrating: a lot effort can go into landing one specific trick and it can leave you mentally drained. It can also be quite dangerous and the very worst thing is being hurt and unable to skate. Also, it’s weather-dependent so really tough over winter - I have to rely on indoor facilities during the dark months.

When you finally land a trick you have been trying for a long time is great. Generally though, it’s just something I look forward to after a long day at work. It’s so much fun.

Are there any similarities between your day job and outside interest

Like planning, skateboarding is interesting. Often seen as an anti-social activity, planners and architects are sometimes are asked to discourage skateboarding when designing public realm. I believe we should adopt more of a shared-space approach and encourage urban activities such as skateboarding in public places, within reason. There are a lot of good examples of this in mainland Europe.