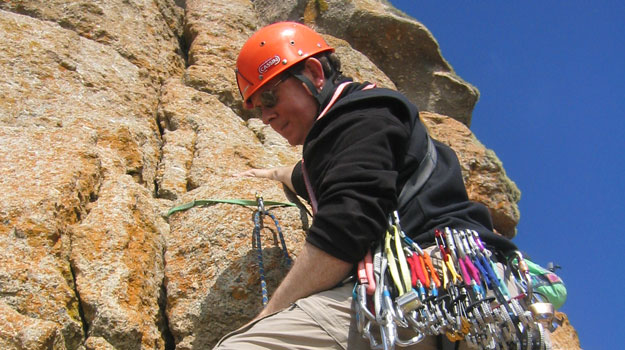 Halliday Fraser Munro's director of planning, Bob Reid, has been climbing mountains since he was fourteen. He's a member of The Scottish Mountaineering Club and former president of the Mountaineering Council of Scotland. Not even the death of a friend whilst climbing in the early 1990s, and a decade of “nagging, mental block”, has kept him off the world's most spectacular slopes, peaks and summits. His highest climb was the first ascent of 6,200m Dandagopurum in the Himalayas in 1989 and he has 30 Alpine seasons under his belt.

How did you get into mountaineering?

Well, I was lucky to spend my teen years in Lancaster close to the Lakes; what better stomping ground. My climbing heroes were mountaineers Joe Brown and Don Whillans, and my scoutmaster Charlie Minheart. I studied civic design in Liverpool because it was equidistant between Snowdonia, the Lake District and the Peak District.

Getting on a bit, I no longer venture as much to the high mountains – the climbing uphill is fine; it's the coming down that does for the knees. Last year I walked the Scottish Border with author Ian Crofton to mark the independence vote and in June he and I climbed Old Man of Hoy in Orkney: think of London's Post Office tower for scale; it took seven hours and I was cock-a-hoop to get to the top of Britain's most inaccessible summit. A month later Chris Bonington celebrated his 80th birthday repeating his 1966 route on the Old Man, trumping any bragging rights I might have had.

I've always found this hard to answer: it's nothing like the famous, but misunderstood, answer by mountaineer George Mallory of Everest fame – 'because it is there'. I can't remember exactly how I got started; probably peer pressure at school, but I do it now for sheer enjoyment and a love of the Highlands.

What’s the toughest thing about it

The first step. You can get spooked, but once you've put on your crampons, tied-on the rope and put on your helmet it becomes second nature; it's a psychological thing.

The new places you see when mountaineering are fantastic. I've visited hot, cold, ice and mountain deserts. Although I've worked most of my life in Scotland, in Glasgow and the Grampians, until last year I had never visited Orkney. You arrive in Stromness and step into a beautiful town with beautifully pedestrianized main street, then you cross Scapa Flow and catch sight of the UNESCO site Scara Brae! All on a climbing trip.