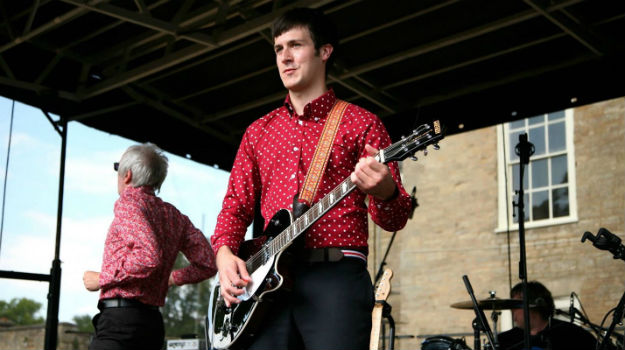 Milton Keynes Council senior planner James Williamson strums for Mad Mods and Englishmen, a six-man band playing 60s and 70s cover versions of songs from the likes of the Jam, the Who and the Kinks. The band plays in small pubs and clubs and local festivals around Milton Keynes as well as bigger venues such as the well-known haunt Fiddler's Elbow in Camden Town, north London.

How did you get into the band?

The band has been around for about eight years and I've always loved their kind of music. I'd watched them play a few times and just over three years ago I happened to be sitting next to them in a bar and told them I played and if they ever needed a guitarist. A month later the call came.

We sometimes come together at the start of the year to look at playing new material but don't tend to rehearse. We play on average one gig a week, which is regular enough to do away with the pressing need for rehearsals. We have a website and a highlight last Easter was playing on a boat on the River Thames.

I love mod music, the era and the fashion, and learned to play the guitar aged right. I'm now 27 and still get an adrenalin rush when I pick up the instrument, especially on a Saturday gig night.

Packing down at the end of a show at one o'clock in the morning can be more than a come-down, it can be a nightmare.

It doesn't matter the size of the venue or where the gig takes place, but good feedback from the crowd is fantastic, especially when it's a sell-out show.

Are there any similarities between your day job and playing lead guitar?

I get a kick out of certain elements of both. At the moment I deal with flood-risk management and when I'm working through new guidance, for example, I can feel a similar sense of achievement. The lifestyles, however, are completely different so finding similarities is a stretch.