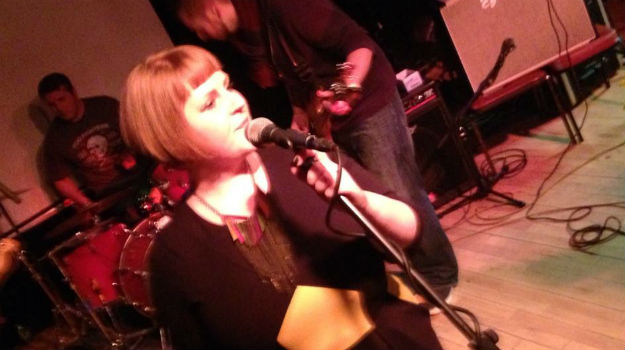 When associate Lisa Russell is not in WYG’s Edinburgh office she belts out songs for the indie band Universal Thee, recently rated the 17th best emerging band in the world.

How did you get into the band?

I have always been involved in music in one way or another, whether playing instruments, singing in bands or as a DJ. I used to sing in an indie/folk band, but my husband persuaded me to come and join his band Universal Thee. It is a great way to do something we enjoy together.

We are self-released on our own label, Eventual Heirs, so as well as the normal practices, gigs, festivals and charity events we are also recording, managing and promoting our music. We released an album in 2014 to wide critical acclaim from the music industry and press. Most of our second album is recorded for an autumn release.

I love the buzz of playing gigs and festivals with my husband and friends - it’s a great excuse to get together and have some fun. I think the band is evolving all the time and I’m really proud of the great upbeat music we make. Lots of people tell us our songs are important to them and other bands say we help influence their music. And, a real bonus this, we get paid to attend festivals and camp in the VIP areas – rubbing shoulders with the rich and famous isn’t bad.

The late nights and travel can be tough if we have a busy gig or recording schedule after a week of work. Sometimes you go to lots of effort to play to an almost empty room, which can be demoralising.

Seeing people have a good time at our gigs keeps us going. There have been some amazing moments too – we’ve been played on the radio, our songs have been nominated for track of week/month and we have been named as 'the 17th ‘best emerging indie band in the world' by worldwide music blog, ‘Emerging Indie Bands’.

Are there any similarities between your day job and being in Universal Thee?

There are skills that are needed for both: project management; networking; social media skills; creativity; persistence, and being able to effectively communicate are essential to succeed in either planning or the music industry. Otherwise they are, quite literally for me, night and day.