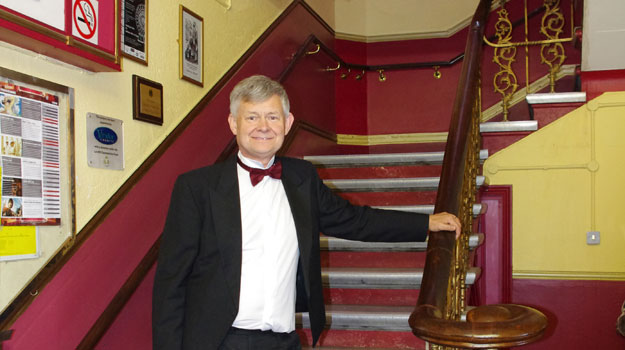 How did you get into cinema?
I've always loved film and in 1997 with a few friends started the charitable trust to run a film festival, which shows 100 films in 30 venues for two weeks every October. A few years ago a 1920s cinema came up for sale and we raised £185,000 through grants and donations to buy it. Some of my favourite films include The Grand Budapest Hotel, The Two Faces of January and Jersey Boys.

What does it involve?
My cinema work swallows up a fair chunk of my spare time; committee meetings, running administration, keeping an eye on the phones and choosing the film programme. Some nights I'll run the projector, others the box office, or maybe I'll help out in the bar. The most pleasurable chore by far is watching films.

Why do you do it?
I come from a technical background but have always been interested in sound and the moving image. Balancing and contrasting the technical with the artistic gives me a real buzz.

What’s the toughest thing about it?
The most challenging aspect is keeping the programme interesting and exciting. It can be tough getting the rights to show some films; we want to show an Italian film at this year's festival but there's no UK distributor so we'll have to get it specially couriered.

Seeing people smile; people are pleased we kept the cinema going: a little old lady recently told me she met her husband on the back-row seats 50 years ago, while usherettes and projectionists from the 1950s and 60s now sit and watch our mix of classics, art house and subtitled films.

Are there any similarities between your day job as a planner and the world of cinema?
Definitely: both are fun. I love planning; it's a vocation, and cinema is my night-time vocation. I enjoy interacting with people and delivering something of real quality, which I do wearing both my planning and cinema hats. We're put on this planet to make a difference and my job as president of POS is to make a real difference. I hope I'm doing the same with local cinema – leaving a positive legacy for the future.