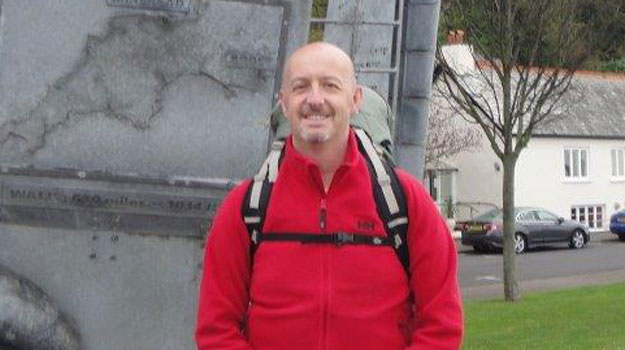 How did you get into coastal walking?

Having worked for Exmoor National Park Authority, I know how fantastic that part of the countryside is. I wanted to get to know it more and did just that recently by completing half of the South West Coast Path, from Minehead to Penzance. I've been doing it for three years and have got this far in three stretches, each one about about eight days long and covering around 110 miles. I aim to tackle the next stage, Penzance to Poole, next Easter.

I do a fair amount of exercise in the gym, and after Christmas sit down with my two young daughters and plot a route. They come with me so we plan treats such as wild swimming and boogie-boarding. Last time we visited one of the country's oldest cinema's, in Lynton, and we always see wildlife: adders near Barnstaple, slow worms outside Padstow and seals in water off Land's End. Walking along the coast near Penzance we once followed dolphins flipping in the sea following a boat for 20 minutes.

I love the countryside: it reminds me how important it is to protect some of the very, very special places we have in this country. It's also a relief from the day job and helps you to both de-stress and re-energise. What could be better than a walk in beautiful countryside rounded off with a cream tea at a B&B chatting away with friendly people?

The rain doesn't help, also, parts of north Devon have you up and down the peaks and valleys. When you're wearing a 40llb backpack, it's not such fun and you can lose 3llb in body weight a day.

Getting to know the countryside better has been a revelation: in parts the coast is hard, isolated and rugged, elsewhere softer. I walk in April, before the summer crowds, and often have areas of coast all to myself.

Are there any similarities between your day job as a planner and coastal walking?

Hmm, preparation and planning for a final outcome are important for both, but the truth is I walk to get away from the planning discipline and empty my head.