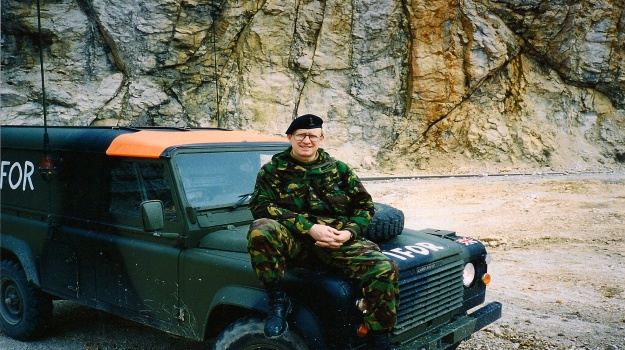 How did you get into being a reserve soldier?

In my gap year before university I bummed around in boats in Gibraltar and joined the local TA regiment – the military life becomes habit forming. Now I'm the assistant director (Reserves) in the Capability Directorate Information at the Army HQ. We have responsibility for the Army’s various command and communications capabilities, including military intelligence and cyber matters.

The work is very much related to policy and developing doctrine. Right now I’m looking at how to best integrate training for both reserves and regular soldiers as well as at a 'pairing' strategy between reserve and regular regiments for seamless deployment in operations. Royal Signals Reservists also provide the strategic communications and coordination functions whenever the military is deployed to support local communities; whether that relates to natural disasters such as flooding, or planned support such as to the Olympics.

I enjoy the work and the challenges, which are completely different from those in planning. Fulfilling a sense of duty is rewarding, as is the recognition - in 2006 I was awarded an OBE for services to the armed forces.

Lack of time is a problem. The reality of life is you only achieve about 60 per cent of what you'd like to achieve because of the need to balance home, work and military commitments. Also, the language is dominated by operational speak and extensive use of abbreviations - I'm always playing catch-up.

Seeing your ideas evolve into strategy is hugely rewarding. Reservists bring a special kind of problem-solving skills: industry is invariably one or two cycles ahead and can be more at the cutting edge, which adds value.

Are there any similarities between your day job and your role in the military?

Both require very special attention to detail, but the implications of getting it wrong the military could be life threatening – a sobering thought.