In the news: The Golden Lion Pub 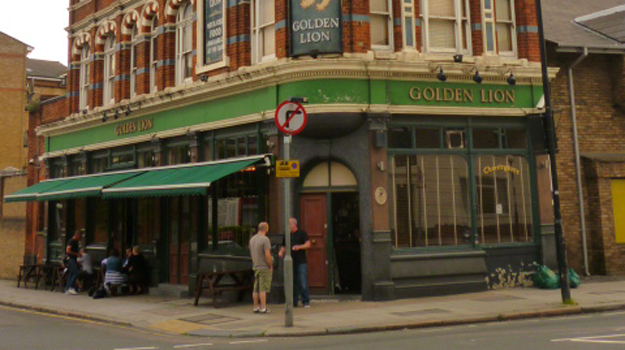 Earlier this week it emerged that a north London council had removed a new permitted development right introduced by the government last year in an effort to protect a pub in Camden from being redeveloped.

The Golden Lion pub in Camden is currently subject to a planning application to change the use of its upper floors into four residential flats, while maintaining a small section of the pub use at basement and part ground floor level.

The developers, Norreys Barn Limited, also requested a Certificate of Lawfulness to allow the basement and ground floors to be changed from a pub to A2 use (financial and professional services). These applications are yet to be decided.

However, the London Borough of Camden moved to save the pub, issuing an article 4 direction that immediately removes the permitted development rights on the building.

Dale Ingram, director of consultancy Planning for Pubs who represented the family who run the Golden Lion in their battle against Norreys Barn, tells her story.

How did you get involved with the Golden Lion?

I first got involved with the poor old Golden Lion in 2012, about two years ago. I met the current tenant Dave Murphy and his lawyer when the freehold of the pub had been sold to a developer. The pub is a happy and moderately successful community pub, which has been there for a very long time and has an extremely loyal following. My client had been there since 1978. His parents Mary and John Murphy ran the pub and Mary is still there and runs the pub on a day-to-day basis despite being in her 80s. Dave Murphy is in his early-40s and is basically the nominal head.

When did it become apparent that the future of the pub was under threat?

There was a planning application in late 2012 to convert the whole building into flats, which was refused by Camden in March 2013. The council maintained that it was a heritage asset and that it was a pub serving a community use, which is protected in their local plan policy. Then the developer’s planners launched an appeal, which was held by a hearing in November last year. The inspector’s decision came out in December and said that the application should be refused to protect the pub use.

That sounds pretty straightforward so far…

Yes, but in September the developer had submitted a second planning application for a new scheme that said it would keep the pub use on the ground and cellar floors, extend the building to the side and convert the upper floors into flats. On the face of it, that’s fine. As a professional I’ve worked on several schemes just like it. However, I was worried that what would happen would be that the developer would use permitted development rights subsequent to a grant of consent to convert the pub to other kinds of commercial uses, either for other A-class uses or, under the revisions to the General Permitted Development Order (GPDO) last year, to a temporary two-year use as offices.

So how did you respond to the second application?

As soon as the second planning application went in we made an application for the pub to be listed as an asset of community value (ACV). The hearing on the first application was on the 12th November when the ACV application was still pending at the town hall. They were clearly waiting to find out what the planning inspector’s view was on the application, because when the decision came out on 12th December four hours later the email arrived from Camden saying that the pub had been granted ACV status.

Why was the article 4 direction required?

The article 4 direction arose because I put in a massive objection to the second planning application, arguing that it was in effect a Trojan horse. I provided examples where this has happened before. We asked them to refuse, but said that if they were considering granting permission we would like a condition removing the permitted development rights of conversion to other A-class uses permanently, conversion to B1 use for two years and against demolition. The developer’s planners wrote back saying that they wouldn’t accept the condition, which to my mind confirmed my suspicions.

Is there anything else that pub campaigners and planning authorities should learn from the Golden Lion?

There have been some changes recently to the way in which article 4 directions can be made that pretty much went under the radar. There are now two types of direction. The first one is a non-immediate direction, where the local authority conducts a consultation before applying it. The other one is where there is perceived to be an immediate threat to a building where it can be applied immediately and the permitted development rights are removed straight away. It’s only temporary for six months and during that time the owner of the building can make representations as can the local community. That’s the situation we’re now in. Camden has had to issue two different article 4 directions – one to protect the pub immediately and the other to protect it in the longer-term. The concern is that planning authorities only serve a non-immediate direction and thereby simply give a building’s owner a warning that they might face restrictions. In such a situation there is nothing to stop them closing a pub overnight and opening up as new business the next day.