In the News: reconsidering a large planning application 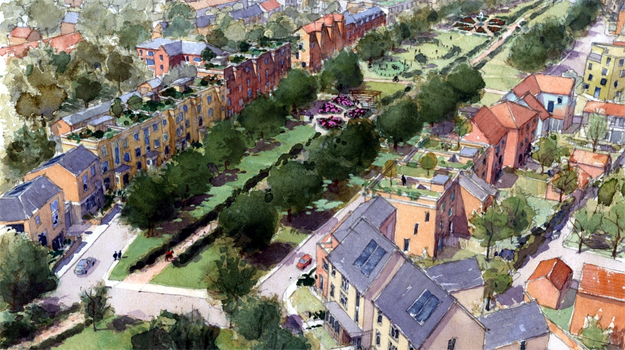 Last week, members of Broadland District Council’s planning committee made a resolution to approve plans for a development of 3,520 homes, a new district centre, employment areas, a large public park and two primary schools to the north of Norwich. The application was reconsidered in light of changes to local planning policy following a previous resolution to approve in September 2013. Ben Burgess, planning projects manager at the council, was responsible for reassessing the application.

Q. When did you first get involved in the application?

A. I have been involved from the start. The developer first approached us in 2009. This development forms about a third of the area within the “growth triangle”, which is the Broadland part of our joint core strategy providing for 10,000 homes. The JCS was adopted in March 2011, with amendments following a legal challenge, and a planning application submitted in 2012.

Q. That was three years ago. Why has the application only just been approved?

The application was actually given a resolution to approve, subject to the completion of a S106 agreement and relevantly worded conditions, by the planning committee in September 2013. However, because of changes to local and national planning policy and guidance, it was considered appropriate to bring it back before members to look at again. The developer could have appealed on the grounds of non-determination but we have been working constructively with them.

Q. What caused the changes?

A. The main change considered was that the "remitted" text of JCS had been reviewed and was re-adopted in January 2014. We also produced a growth triangle area action plan and a development management development plan document  - both of which are currently at different stages of examination - plus a neighbourhood plan was also adopted in Sprowston, one of the existing parishes affected.

Q. What work on the application did this necessitate?

A. In effect all I had to do was write another committee report. That takes time, although it wasn’t as long as the original one. The main bulk of the work was on amending the reasons justifying each of the conditions  to refer to the local plan changes. It didn’t change the recommendation – in fact the policies strengthened the reasons for approval.

Q. Has it been a challenging process for you?

A. It is the biggest application that the council has considered for a while. But, considering its size, it has not had a huge level of opposition.  The developer did a lot of community consultation of its own volition, which I think has greatly helped the process. The real hard work for us will come when we get reserved matters applications coming in.